For me, barley was a late discovery. I first tried it in a beef and barley stew they served over in Fort York (as a former Girl Guide, we camped in odd places), and I was intrigued by this chewy grain that was so superior to the rice I had daily.

Ever since I began cooking my own meals, I decided to venture out and try barley – I’ve made soup, salads, and eaten it as rice, and lately I’ve made some recipes I have really loved.

I have always loved the taste of barley tea but it is not so readily available in Canada, even in my local Asian grocery stores. So the only thing to do was make my own.

Roasting barley is a quick and easy process – just toast dry in a pan until they’re a golden brown, and store them away to brew another day, or brew a large batch that you can keep in the fridge. I followed the recipe from La Fuji Mama as I also had trouble finding unhulled barley.

When I drank this hot, I found that the burnt flavour from the roasting process was quite strong, but virtually disappeared after it cooled in the fridge.

I love this as a cooling drink – especially for when you’ve had too much greasy food – this helps keep the inflammation/canker sores at bay.

This is the perfect salad to take to school or work or any place where you bring a lunch and might not necessarily have access to a kitchen to heat food up.

You can pretty much put anything you like into this salad, and combine it with any vinaigrette-type dressing. 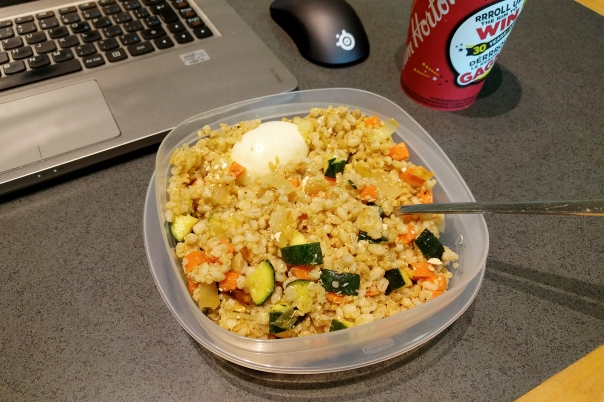 Mix-ins (and my favourite suggestions)

Components of a dressing

My favourite is apple cider vinegar + olive oil + maple syrup + cumin and/or smoked paprika. I usually toss the barley with some olive oil after cooking so it doesn’t stick together, so I don’t add extra oil when making the dressing.

My other favourite is barley in soups… but I have officially run out of barley so I must go purchase more before more barley recipes can materialize.

Saturday morning tea time The lemon yogurt poppyseed loaf was my excuse to break out my tea cup 🥰
I caved and bought instant coffee to properly make dalgona coffee. Here it is in all its frothy splendour 🥰
Staying sane with pastries to go and homemade iced coffee. Also catching up with a lot of shows I always told myself I'd watch on a rainy day
Made my own Thai iced tea for the road 😁